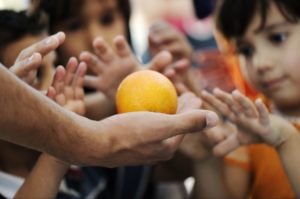 In Acts 6, when the first century church was growing by the thousands and social needs were growing as well, a problem developed which the Apostles were asked to resolve.

Pastors face this challenge almost daily. When someone or some group in the church is unhappy or feels they are being neglected, they go to the pastor. That’s not necessarily a bad thing. The challenge is that too many pastors, rather than asking the people to propose a solution, somehow conclude they should add this one more thing to their list of things to do.

Notice how the Apostles responded to the concern of widows being neglected.

So, the Twelve called a meeting of all the believers. They said, “We apostles should spend our time teaching the word of God, not running a food program.” (Acts 6:2 NLT).

With all the growth the early church was experiencing, the Apostles did not lose sight of what they themselves had been called and commissioned to do. They were not going to be distracted away from their call.

I am aware that, in many cases, pastors lead a small congregation and must give time to things that take away from their primary calling because they must wear many hats. However, even in small churches, pastors must not be afraid to ask themselves if they are giving time to things which take away from their primary calling, when they have people around them who could easily do them.

Why do so many pastors get sidetracked into doing things that take them away from their call? The reasons are many but let me highlight three possibilities.

Low self-worth. Some pastors have such low self-worth they rely on what people think of them to feel worthy. As a result, they run themselves ragged trying to get everyone to like them.

Power and control. Some pastors think because they are the lead pastor all power and control lie with them. Even when they ask others to do something, they have a need to know and be present every step of the way.

Lack of trust. Some pastors have trouble trusting those around them. This is especially true for pastors who experienced betrayal with church or family members in the past. In this scenario these pastors believe the only way to avoid further betrayal is to remain in control of everything that is taking place in the church.